After a couple weeks of not sewing and of feeling miserable for some strange reason, I realized that sewing is my self-care. Sometimes it’s frustrating and annoying and sometimes it makes me want to cry. In spite of all the projects I’ve put aside when they were so close to done because they didn’t fit right and I didn’t know how to fix it, I realize that sewing is a way for me to reset myself after busy, chaotic days. So, after feeling blue for a while now, I decided to whip up something new: Maritime Shorts.

Summer is quickly approaching (even if it doesn’t seem like it) so that called for some summer sewing. I tried a pattern I had lying around a few weeks ago (same pattern as my Cross-Back Dress), but it didn’t fit. After scouring reviews on Pattern Review, I settled on the Maritime Shorts pattern from Grainline Studio. 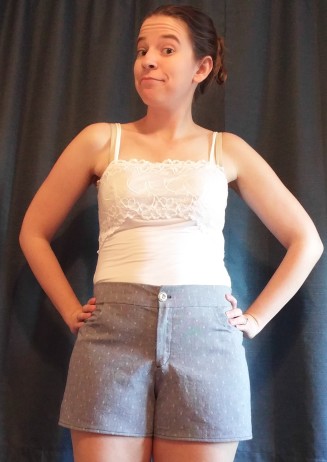 My hips and waist measurements are separated by FOUR sizes on this pattern. That being said, the finished garment measurements for the hip size looked promising for both my hips and the top of the garment, which is said to sit 2.5″ below the waist. Nevertheless, I knew I needed to make a muslin of this one. So I found some lightweight denim fabric and used a 40% off coupon and got to work.

I cut a size 8, corresponding with my hips, and sewed and sewed and sewed. I tried the shorts on once I got them all put together (I need to start doing this earlier in the sewing process). I realized that I needed to take about 3″ off the waist, though the hips fit great.

I regrouped, finished the waistband, added a button (was feeling lazy about the hook and eye situation recommended in the pattern), hemmed, and here we are. The instructions were good overall, though I did utilize the online tutorial for much of it. 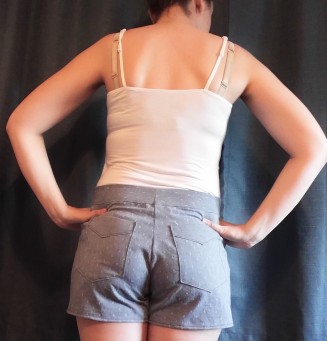 Next time I make the Maritime Shorts, I’m just going to go ahead and grade my sizing. I really should have done from the start. I will cut size 2 at the waist and size 8 at the hip or do a full butt adjustment. Hopefully I will not have to alter as much in the process. Now to find super cute fabric! 😉